Please visit and follow The Bassey Blog on SoundCloud.

Arctic Monkeys’ Alex Turner – The Record(s) That Changed My Life

“One of the last things I do before I leave to go on tour is to put a record on. It’s one of the first things I do when I get back again too. We listen to music every day as a band, but there’s nothing quite like sitting there with your turntable, playing a record in its entirety.

One of my favourite 45s is by Shirley Bassey. It’s ‘Big Spender’ on the A-side but the B-side is this song called ‘Dangerous Games’, which I’ve never really heard anybody talk about. It’s amazing, quite Bond, but I don’t think it was for a movie. I’ve always wanted to cover it, and I think it’s mad it’s just a B-side.

Where did I find that one, I wonder? Possibly in this bookshop-cum-record store in Chicago. It was one of the first times we toured the States and there was a shop by the venue. It’s mad what you find sometimes – I remember finding a seven-inch from our manager’s band from the ’80s, Vitamin Z, just in a random record shop in New Orleans.

There was a basket full of $1 45s and I just pulled this thing out. We were just like, ‘Fuck, there he is! On the cover!’ That’s the thing about vinyl though, you can just while away the hours digging through records. I still get really excited by it. Don’t get me wrong, I love downloads, but nothing quite beats stumbling across something you weren’t banking on finding.” 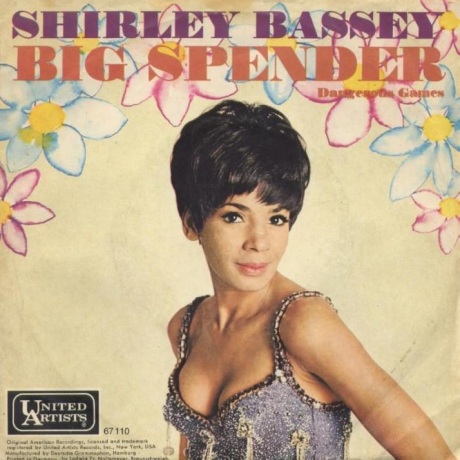 See below Arctic Monkeys perform their cover of Diamonds Are Forever at Glastonbury in 2007, and then the performance from Dame Shirley Bassey, showing them how it should be done.

Dame Shirley’s version of the song ‘Born To Sing’ has been released on CD for the very first time.  The song is featured on a double CD by Dalida entitled ‘Depuis Qu’Elle Est Partie’ and is available from Amazon France.  The price is €15.99 plus postage.  There are three versions of the song on this set and Shirley’s is one of them.  This song was originally released as the ‘B’ side to ‘There’s No Place Like London’ on the Towerbell label.  I have no idea if this has been taken from vinyl as it is believed the master tapes are lost but Dean, a big fan of Dame Shirley’s, has told us that the quality of the recording is very good.  I have not heard it myself as yet but I have ordered a copy of the CD set and hopefully it will arrive shortly.  It is very doubtful if this song will appear on CD again.

Many thanks to Dean for the information regarding the release of the CD set.

Thanks to G for another great mashup and for naming this one after me!

Please visit and follow The Bassey Blog on SoundCloud.

The first recording for United Artists