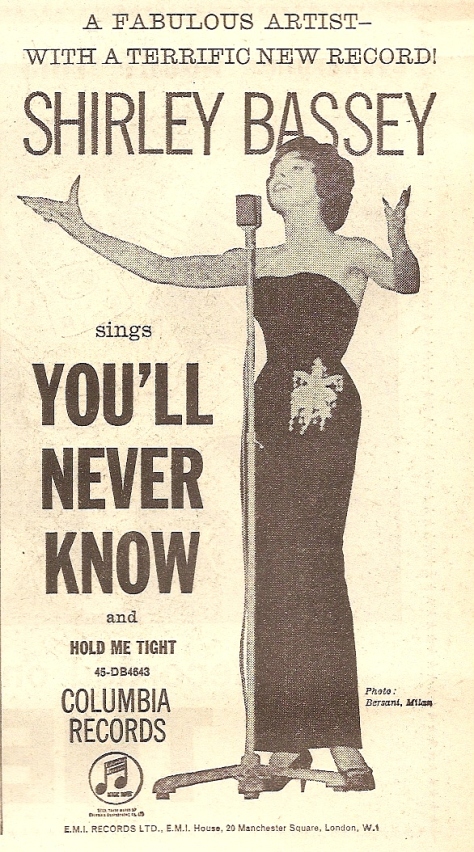 “You’ll Never Know” is a popular song with music written by Harry Warren and the lyrics by Mack Gordon. The song is based on a poem written by a young Oklahoma war bride named Dorothy Fern Norris.

The song was introduced in the 1943 movie Hello, Frisco, Hello where it was sung by Alice Faye. The song won the 1943 Academy Award for Best Original Song, one of nine nominated songs that year. It was also performed by Faye in the 1944 film Four Jills in a Jeep.

The song is often credited as Faye’s signature song. However, Faye never released a record of the ballad, and frequent later recordings of the song by other singers diminished her association with it.

It was recorded in 1943 by, among others, Frank Sinatra and Dick Haymes. The Haymes’ version was also a number one hit for four weeks on the Harlem Hit Parade charts.

Sinatra recorded his version at his first recording session at Columbia as a solo artist. (He had recorded at Columbia in 1939 as a member of Harry James’s band.) It was arranged and conducted by Alec Wilder with the Bobby Tucker Singers providing accompaniment. Sinatra’s version charted for 16 weeks starting July 24 and spent two weeks at number 2.

In Britain, the recording by Vera Lynn was popular during the ongoing Second World War.

The Sinatra and Haymes records were made during the 1942–1944 musicians’ strike, an American Federation of Musicians strike against the recording companies. As a result, the recordings were made without musicians, with vocal groups replacing the usual instrumental backup. The group backing Haymes, The Song Spinners, was actually given credit on the Haymes record. (The Song Spinners #1 hit, “Comin’ In on a Wing and a Prayer” held the #1 spot on the charts for three weeks preceding Haymes’ “You’ll Never Know.” Vocalist Margaret Johnson of The Song Spinners did the vocal arrangements for both songs.)

The song was the first song that Barbra Streisand ever recorded, in 1955 when she was 13 years old. It was the opening song on her 4-CD box-set Just for the Record (1991). The collection closed with another version of the song, sung as a duet by Streisand at age 45 (recorded April 21, 1988) and herself as a girl in that first recording. Barbra dramatized the 1955 recording session as part of the opening of her “Timeless” concert tour in 2000. A recording of this was featured on the accompanying CD & DVD release: “Timeless: Live in Concert”.

Doris Day recorded a version in her two-album set Hooray for Hollywood in 1958.

Shirley Bassey reached #6 on the UK charts with her 1961 version.

Al Hirt released a version on his 1965 album, They’re Playing Our Song.

The Mamas & the Papas vocalist Denny Doherty included the song on his 1974 solo album Waiting for a Song. The single was released with “Goodnight and Good Morning”, from the same album, as the B-side. This version reached the top 15 of Billboard’s Easy Listening survey.

Elkie Brooks recorded it for her 1984 album, Screen Gems.

Lew DeWitt, formerly of The Statler Brothers, released a version in 1985 on the Compleat label.

Vocalist Michael Bublé performed a live recording of the song on his 2004 album, Come Fly With Me.

In 2006, Frank Sinatra, Jr. released an album entitled That Face! including the song “You’ll Never Know”.