Dame Shirley Bassey is among the first sixteen celebrities to get their names emblazoned on Britain’s own Hollywood-style walk of fame, which is to be unveiled on September 18.

‘The Avenue of the Stars’ will be located on a permanent walkway outside St. Paul’s in London’s Covent Garden, where silver plaques embedded into the pavement will honour legendary performers.

Like its Hollywood counterpart which receives millions of visitors each year, organisers hope the walkway will become a major attraction in London’s tourist-rich Covent Garden district.

The plaques are to be unveiled in a three hour live television special on ITV1, presented by Chris Tarrant, and which will include a spectacular fireworks display on the River Thames.

It is reported that many celebrities have been invited to attend the launch and to perform at the live show, though it is unclear whether Shirley will be attending or performing live.

Initially, 100 celebrities will be honoured with a plaque, though further additions will be made each year. The stars, who can be awarded a place posthumously, are made up of musical, comical, film or television greats and must have been born in Britain or the Commonwealth.

Another Dame, Edna Everage, is also to be honoured with a plaque. She said jokingly that “St Paul’s in Covent Garden is one of my favourite places in little old London and I am hoping to be laid between Michael Caine and Sean Connery.”

The walkway was devised by Michael Hurll, the founder of the British Comedy Awards, and is set to mark ITV’s 50th anniversary. A spokesperson for ITV described it as a “lasting tribute to the greatest names in British entertainment and arts, both past and present.”

The committee that has chosen the first names include BBC chairman Michael Grade, former ITV director of television David Liddiment, writer Kay Mellor and composer Don Black whose lyrics include the Bassey favourites Diamonds Are Forever and If I Never Sing Another Song.

The ceremony to mark the first inductees into London’s Avenue of Stars took place on 18th September. Part of the celebrations for ITV’s 50th anniversary, the event was televised in a three hour special, where celebrities appeared in person or via video link.

Shirley was one of the first stars to be presented with their award and was introduced by presenter Chris Tarrant, who described her meteoric rise to fame, referring to her “fabulous voice and equally fabulous frocks” and of course the usual Big Spender clichés.

Her original recording of Goldfinger was playing in the background as she entered the stage to rapturous applause from the celebrity studio audience. She was dressed in a beautiful purple flared silk gown, with straight natural hair and looked stunning.

Sadly the show was marred by controversy, described by one commentator as a “television shambles” and by Peggy as a “cringe-worthy festival of back-slapping.” Bad organisation and an inappropriate sarcastic style of presentation spoiled what could have been a great event.

While some recipients benefited from well rehearsed sketches, Shirley did not. As she walked out, she was clearly surprised to discover that the stage was made of glass and suspended above water. This must have been disconcerting for someone in a gown and very high heels.

After Shirley had thanked everyone, things went from bad to worse. Although producers had told her beforehand that she should simply accept the award and then exit, Chris Tarrant allowed a painfully uncomfortable silence to ensue as he waited for Shirley to make a speech.

As Shirley made her exit from the stage Tarrant made another sarcastic quip, fuelling some irresponsible commentators in the days following the event to label Bassey a drunken fool, when is clear that the only fools were those responsible for producing the televisual farce.

The morning after the ceremony Coronation Street actress Susie Blake discussed the surreal event with Philip Schofield on ITV1’s ‘This Morning’ programme. She explained how she was right there with Shirley when she got on the stage herself and saw all the flowing water.

After the awards show had finished, Shirley appeared briefly on ITV2’s ‘All Star Party,’ which went behind the scenes at the lavish after party. Shirley waved at the camera and shouted “Hello Mum!!!!” – a reference understood by viewers of Paul O’Grady’s afternoon talk show.

Thanks to those on the message board whose comments were used to create this report.

Thanks to Susan for providing the photograph of Shirley’s star.

This wasn’t the first time Shirley has been honoured on a walk of fame; the photos below show how she created her unique entry on Rotterdam’s Walk Of Fame Starboulevard, in 1991. 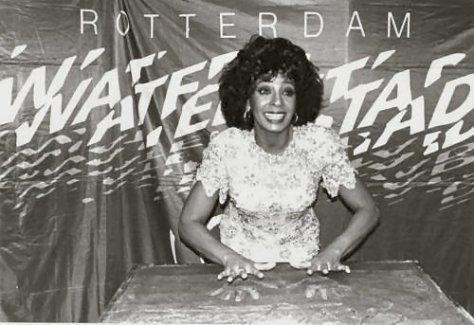