For today’s blog a wonderful article from an Italian newspaper from 1971. With very special thanks to Peter for the translation.

This is the last post for now as I will go on holiday for a week.

QUEEN OF MONTE CARLO
Shirley holds the hand of here nephew Mark. Behind, in the center, is Sharon, her eldest daughter, her husband Sergio Novak and, on the right Samantha. Bassey triumphed on Saturday, 6 August at the Red Cross Gala in Monte Carlo, singing seven songs. The most applauded were the title tracks from the films ‘Goldfinger’ and ‘Love Story. Shirley married Sergio Novak, from Trieste, on the 12th. of August 1968. She had met him some years ago in Venice when he was deputy manager of a hotel on the Lido. At the end of August Shirley will return with her family to their home in Lugano. 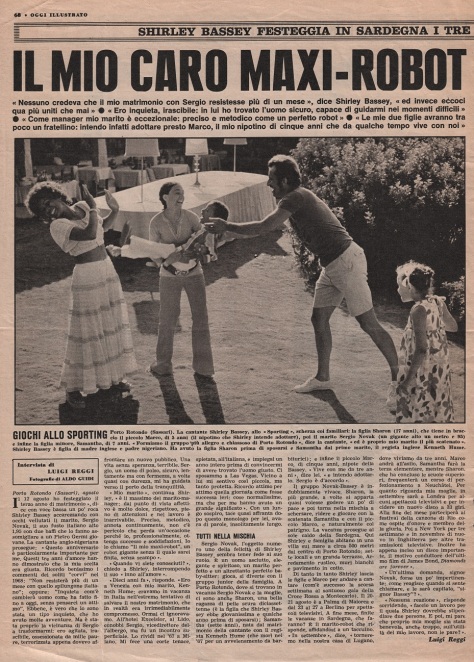 Shirley Bassey celebrates her third anniversary in Sardinia with her
beautiful Italian giant.