In 1975 Shirley Bassey recorded one BBC show. The show was recorded in Bahrein,  The first song of the show was Something. Also here an interview from February that same year with a Dutch programme guide called TeleVizier. Here a picture of Shirley while recording Something in the studio and a picture of her with the silver disc she received for Something. 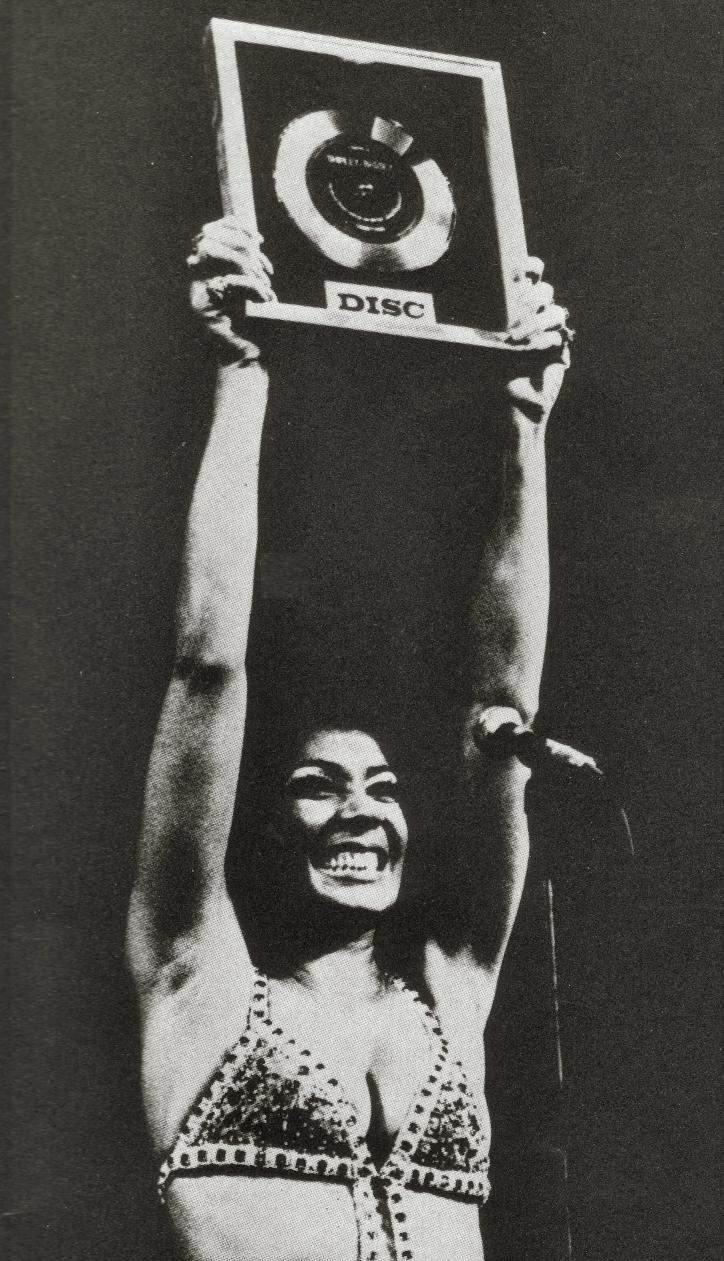 Shirley Bassey, years ago she shot to the top and that is where she remained. She sometimes hates her profession but the magic of the applause, the lights, the audience always make up for that. Sometime ago she visited our country and she had a frank interview with ‘TeleVizier’.

Shirley Bassey stopped by in Holland briefly. A travelling diva who refuses all interviews. Because she has told it all before. She is on the top for already more then 20 years. From workingmen’s clubs to….. A true story. To TeleVizier’s Boud van Doorn she opened up at the Amsterdam Hilton Hotel. A brief up-welling of candour.

Shirley Bassey knows what she’s worth. The most expensive suite in the Hilton Hotel is just good enough. “You have to make demands if you have to live out of suitcases” she claims. Ten meters away from her bed her second husband and her secretary are talking, sitting at a small table. When their voices become too loud the diva tells them to talk softer: servants of the diva. A little while later she makes up for it: “When am I the happiest? In bed, sure, especially in the arms of somebody I love, ha ha ha”. Actually La Bassey doesn’t want to talk. Why would she? Her booming irresistible voice does the work for her in concert halls that are always sold out. And there is the eager record company for the people who can’t make it to her concerts. That’s it, no more please. She doesn’t like fans. “Please, my work is demanding enough as it is. I can’t have presidents of fan clubs at my home. Then I would have nothing left for myself at all. Of course people can start a fan club as long as they don’t bother me. That’s all okay with me”. 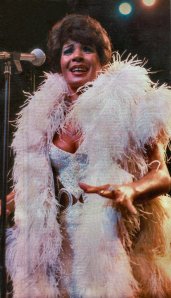 TeleVizier is allowed in because the one with perseverance  wins. La Bassey makes her entrance, gives out a sigh and surrenders. Okay, she will tell her story again but that includes the feelings, the emotions, the tensions, the doubts. Bassey in private.
“I think I have a genuine love/hate relation with my profession. You’re the star, the happy one, the rich one and you can’t complain because you are the favourite. But I am also a mother of three. Three children that persistently cry every time my maid packs my suitcases.
But still I had to smile at airports because Bassey goes on a world tour. Isn’t that rich? My eldest daughter who is 21 now still weeps. It makes you think what the effect has been on those children. I myself was a very peculiar kid. The youngest of seven children from a very poor Welsh family. I played soccer and rugby with the boys in the street. Every time I came home with bruises my mother said: “Shirley, when will you become a girl”! I think I succeeded after all, ha ha ha. I hated school, really hated it. When I was fifteen I started to work at the conveyor belt. We had so much fun back then. Really me and the girls had a bliss. But I had to give the small salary I earned to my mother so I started to sing to make some extra money. I was discovered but did not like it one bit. Show business, I thought it was disgusting and walked out of it. It was not for me.

Than I worked as a waitress in a restaurant. Walking around with three trays full of plates”. She demonstrates how she did it in a perky way. “But six months later I met an old friend again who was in trouble with his show. I was going to be the star of the show, would I help him out? I gave in. It must have been my calling because it all went so smoothly. It seemed my destination to become such a big star. All of a sudden you are on top of the world and a world star and there is no way back. You have to go on whether you like it or not because you can not let thousands of people down. An endless flow of obligations. That is when I hate this profession from the bottom of my heart. Right to the moment when I enter the stage. The lights, the orchestra, the applause, all those people that have come to see you. It is always magical. A potion you want to drink over and over again and you get addicted to. I don’t believe there is one single person on this earth who is entirely happy, neither am I. But I have been very lucky I think. I have a wonderful husband who looks after me very well. Both as husband as well as my manager. Besides that I have lots of money and I am not ashamed to say that. To the contrary, it gives me a wonderful independent feeling. In the old days lots of people forced me to do things I did not want to do. Now I call the shots. That’s where the money comes in handy. In a certain way you buy your own freedom. I think young beginning artists have it much easier that we had. They go to the top much faster but don’t stay there very long. Television gives and takes from them. It takes away the possibility for them to work on an actual career. I find television terrible. The top is presented to them on a silver platter and what is left after that? Besides that less people make it to the real top because they did not went through the old schooling we had to go through which is very necessary in this business. My youngest daughter Samatha wants to go in show business as well. She is thirteen now and told me she wants to become a hippie singer, barefoot with a guitar. Of course I tell her over and over again that by the time she will be old enough to become a singer there won’t be anymore hippie-barefoot singers. But she has the right answer for that: “Mother, that is just right because then I will be the only one”. Great isn’t she? I also have a son who wants to become a dentist and my oldest daughter is twenty-one and she wants to become a nurse. She would never like to step in my footsteps: she has seen too much. I must say I am very lucky with my children and it is wonderful that they find their way in life because apparently that is not always the case with children from famous parents. Every year we spent three months together in my home in Lugano and we talk a lot. It is the happiest time of the year, I must say.

My bed plays an important role in my life. If I would have to give it all away I would keep the bed. I spend a lot of time in bed also because I suffer from morning sickness a lot. There is a simple solution for that which is to stay away from me. I am sure my maid can tell you how terrible I am in the morning. She always sends in my youngest daughter if I have a telephone call or something like that. Before she comes in she always puts on my favourite music. I never discuss colleagues with the exception of one: Josephine Baker. I was so impressed by her. I adored her. What a craft she had. I worshipped her. I will never forget that I had the chance to give her fourteen roses. They had all different colours and were symbolic for her fourteen adopted children. A film will be made about her life and I will play the part of Josephine. At first Diana Ross would but I am sure they will pick me over Diana Ross. It will be my first movie role. I don’t know if I can act but I will manage to play the part of Josephine. I loved her so much. And I loved her style. All the glitter and glamour. It is the same for me…..something happens…..as I told you before: it is pure magic.