Dame Shirley fan Dennis would like to share some of his happiest memories from over the years with us. Below an email he wrote for the blog and a selection of pictures he sent that we hope you all enjoy. Thanks Dennis!

Hello Pieter,
Thank you for replying to the email I sent you. It was my photo album titled 1957-2013. I was happy you found them of interest and hope you can find a way to include them in a future blog so DAME SHIRLEY BASSEY fans perhaps will also get some enjoyment from my photographs and my dedication to the greatest artist of all time not just female but greatest artist male and female! Celebrating 60 years in show business, I have been so fortunate to have had Dame Shirley in my life. Since 1957 at 17 and continue to still have her hopefully to the end of my life. I realise Shirley started her career in 1953. Making 2013 her DIAMOND year in show business. I still treasure a concert ticket signed by Dame Shirley outside Birmingham Town Hall in 1961. Priced 10/- shillings or 12/ 6 , (pre decimalisation). She arrived unexpectedly it seemed from nowhere, to perform in concert and without thinking I just had only my ticket in my hand which when I asked Shirley for her autograph she kindly did then went straight into Birmingham Town Hall. I was 21, Shirley 24 and as always gave a fantastic performance. The next time I saw her in concert again in Birmingham was in 1963 where I gave her the cuddly panda for her expected baby Samantha where I had seen her in concert on the same tour at Coventry and Leicester 6 days before. My reason for getting in touch with you again so quickly is to enclose some more photographs you would perhaps like to include in your blog of my study which I dedicate to Dame Shirley. Only close friends and family have ever seen my collection of memorabilia (framed concert posters) on my walls my collection of porcelain mugs, concert shirts, my D.S.B key ring, my Thank You For The Years, Diamond Paper Weight Commemorating 50th. Anniversary, Diamond Jubilee Concert programme at Buckingham Palace, (June 2012), concert programmes from 2/shillings to 10 pounds, concert ticket from 10/- to 35 pounds, 78 r.m.p records, 45 r.m.p records, E P’s, 10 inch LP’s, 12 inch LP’s, 12 inch picture disc, CD’s, DVD’ s and my treasured photographs taken with Dame Shirley. A Letter from Dame Shirley would be more than I could ever hope for but maybe a letter from her personal secretary, or fan club, if by chance they see my letter and photographs to you Pieter on The Shirley Bassey Blog and next time I write to you I will enclose a copy of the original letter which I gave to Dame Shirley on stage in Birmingham 50 years ago in 1963 and also again on stage in Jersey at Fort Regent in 1995 which my two photographs confirm.
My sincere best wishes to you and all Bassey fans on the blog. Dennis. 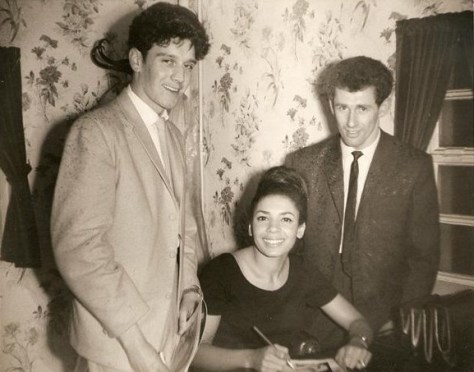