For today an article from Mayfair Times

She encouraged singers to relax as they performed, in accordance with her maxim that ‘unnecessary effort disrupts function’

Helena Shenel, who has died aged 89, was a vocal coach to the stars, helping many who had lost their voices; she claimed to have been consulted by George Michael, Annie Lennox and Shirley Bassey, whose voice faltered in 1985 after the death of her 21-year-old daughter Samantha.

“I just worked with Helena doing these vocal exercises strengthening my vocal cords,” Shirley Bassey said in 2016, recalling how she had dried up mid-concert while trying to sing Goldfinger. “After the year she said, ‘Do you know, I’ve discovered you’ve got another octave that you never use. I’ve never heard you sing that high!’ And she did my spirit the world of good, and my soul, and I went back on stage.”

Helena Shenel recounted how the singer Joe Cocker turned up apologising for being “shaky” because he had not been permitted to bring his drugs into the country; Ozzy Osbourne arrived at her nondescript flat on the border of Maida Vale and Little Venice surrounded by security guards, but being no fan of heavy metal she had to ask which one was the Black Sabbath singer.

On one occasion Shirley Bassey stepped out of the lift and was told by another resident that she “looked just like Shirley Bassey”, to which the singer replied: “A lot of people tell me that.”

Shirley Bassey on stage in 1978

Much of Helena Shenel’s work centered on the anatomy, encouraging singers to relax as they performed. When they were on tour or unable to meet in person, she would record vocal exercises on tape, always following her maxim that “unnecessary effort disrupts function”.

She was born Helena Patricia Leahy in Mayfair, central London, on January 11 1931, the younger of two daughters of Adelina von Reuter, a “gaiety girl” who danced in the West End, and her husband Michael Leahy, a former amateur heavyweight boxer from Limerick who had lost a leg fighting for the British at Mons in 1914.

In a previous life, Helena was convinced, she had been Giuditta Pasta, the 19th-century Jewish-Italian soprano for whom Bellini wrote his opera Norma.

Michael became a medical hypnotist and his daughter, who later deployed some of his techniques, recalled meeting clients such as Edwina Mountbatten and Somerset Maugham at their home.

During the Second World War she was dispatched to his family in Ireland, returning with a love of horses and a strong Irish accent that was tamed at Poles, a Catholic boarding school in Hertfordshire, where learning to curtsy took priority over typing skills.

She left at 15 to join the repertory theatre, and at 17 had an affair with Paolo Silveri, an Italian baritone twice her age whom she had met by the stage door at Covent Garden and who inspired her to become a singer.

Her father paid for her to take lessons with the tenor Dino Borgioli, who had enjoyed a pre-war opera career in London, although she recalled that Borgioli once cancelled their class because the conductor Arturo Toscanini, his mentor, was in town.

Over the years she had minor roles in musicals, including The Most Happy Fella, The King and I, and Pickwick with Harry Secombe in 1963. She also appeared in the revue GB presented by the religious movement Moral Rearmament, and later sang in Cats and Evita.

But her stage career never really took off, while married life required more sociable working hours than the theatre would allow. Twice she lost her voice and was saved by a faith healer.

She turned to coaching after being heard practising alone on stage by a fellow singer, who asked if she could help with his technique, and gradually built up a following. Meanwhile, she was working with Norman Punt, an ear, nose and throat specialist who, she said, taught her about anatomy while she taught him about singing.

Her first celebrity client was Paul Young, who consulted her after losing his voice while on tour promoting his 1983 hit Wherever I Lay My Hat. Others included the actress Su Pollard, the singer Peter Gabriel and the crooner Michael Dore, a former member of the Swingle Singers, whom she named as her musical heir.

Helena Shenel was twice married: in the 1950s to Hugh Greville-Morris, and in 1957 to Rifat Shenel, a Turkish-Cypriot violinist turned restaurant manager.

Both marriages were dissolved, though she nursed Shenel and her subsequent partner, Richard Alda, a singing teacher through long illnesses; she and Alda had met in 1974 on the set of the Gene Wilder comedy-mystery The Adventure of Sherlock Holmes’s Smarter Brother. There were no children.

Here’s some information about Helena, thanks to http://www.record-producer.com

In addition to Dame Shirley Bassey, people whom Helena Shenel has helped with their singing include Paul Young, Annie Lennox, Peter Gabriel and George Michael.

Using the voice correctly:
“I don’t teach people a style, I teach people how to use the voice and the muscles involved in singing correctly so that they don’t strain anything and get the best possible development out of their particular voice.”

Screaming heavy metal singers too?
“They are all using the same instrument. I show them how to use it without damaging it.”

Why do top singers go to her?
“To make sure that they do nothing to strain the voice. They might be going on tour or have a heavy recording schedule, and they would ask me ways of strengthening the voice and making sure that it doesn’t get tired.”

Singing out of tune:
“That’s a bit difficult. A student of mine first came to me saying that he really really wanted to sing, but I had to ask him if he realised that he couldn’t sing in tune. Added to that he made a noise which was akin to something between a bull bellowing and a donkey braying – painful. We persevered for about three years and he eventually became a very good singer. It is amazing what you can do with someone who really wants to do it, but you need patience. Sometimes people can’t sing in tune because they are pushing and forcing the voice beyond what nature intended it to do. One of my most important things is that you can’t pronounce words the same way as you would speak them because you run the risk of singing out of tune.”

Breathing:
“Breathing should be as natural as possible. I never give people special breathing exercises. I teach them how to sing not how to breathe. You can breathe very well and be a long distance swimmer, it doesn’t necessarily mean that you can sing well.”

How many lessons?
“It depends so much on the individual. A young man singing with a band came to me for an hour long consultation. I told him about putting his head and neck in the right position, opening his mouth correctly and all the various things. At the end of the lesson he said “I can’t believe it, it’s absolutely amazing the difference it makes”. A few days later after a gig he told me that his voice felt so much stronger, it didn’t get tired or hoarse and the band all thought he sounded better. That was after one lesson. It depends to a large extent on whether the person has an open mind and is willing to accept my ideas. I do occasionally get a bit of resistance if people are unwillingly sent by their managers or record companies, but generally I find that people with the most outrageous public personae are really very nice people with a very good professional attitude.”

This next article is thanks to Liveatthesuite.com
Singing is good for you and can be fun, when you discover how easily it is done.

Helena Shenel, internationally known singing teacher, is highly regarded as an expert in showing popular singers how to get the maximum potential from the voice withot strain. Among the famous clients she has advised are Shirley Bassey, Peter Gabriel, Lulu, Annie Lennox, George Michael, Marti Pellow, Billie Ray Martin and Sarah Washington, to name but a few.
In Helena’s own words: “I will show you how you can use your body to help you sing well and make breathing easy; how to open your mouth and sing words easily and clearly in all parts of the voice; how to extend the range of your voice and strengthen it – and how to sing quietly. Above all, I will teach you how to think about singing. This will give you supreme confidence in your ability to sing. When you practise the exercises exactly as directed you have the recipe for developing your voice without straining it.”

Helena Shenel – a Catalogue of Compliments….
Shirley Bassey – “Helena Shenel gave me back the voice I thought I had lost. She gave me high notes and a falsetto I never knew I had and above all she gave me confidence. I can’t often get to see Helena, but always have her tapes – they are my lifeline!”
Peter Gabriel – “Helena is a marvellous teacher and I very much enjoyed my lessons with her”
Sue Pollard – “Having been singing professionally for twenty years, Helena in my opinion is far and away the best teacher I have had. She makes lessons fun and she also makes sense, and through her I feel a much better performer. She also makes a mean Lemon Chicken!”
Nomis Management – “The voice coaching you have given George Michael has proved invaluable”
Jazz Summers (Manager) – “With Helena Shenel you will discover the eccentricity of your own voice”
Billie Ray Martin – “Without Helena Shenel I probably wouldn’t be singing today. I thought at one time that my constant loss of voice was permanent until I ended up with Helena who in a matter of four weeks rectified the problem”
Efua – “Learning with, and form, Helena Shenel has helped a lot, both in the studio and with live shows. On one occasion I had lost my voice completely and had to sing live on TV that afternoon. I called Helena in a panic and two and a half hours later I was singing. How? – I’ve no idea. Ask Helena!”

For today’s blog we skip the years 2018 and 2019 as there are no more new newspaper articles about those years. The year 2020 was the year of the recording of Dame Shirley Bassey’s last album I Owe It all To You and it was dedicated to her fans and to Helena Shenel her vocal coach who passed away that year. The next blog will be about her. For now a great article from Cultured Traveller from 2020.

Another fabulous gown description from Ian the Gowns Guru

This stunning gown was designed by Loris Azzaro for Dame Shirley in 1974. It’s a sexy number!

I feel that this creation may have started out as a private gown for DSB. She first wore it on her BBC TV special in 1974. Where she did a duet with Neil Diamond

It’s a stunning black sequinned gown, cut on the bias, with spaghetti straps.

Under TV lighting the dress has a sensual look to it, almost with a leather sheen!

Dame Shirley wore this gown for several appearances on television both here and abroad.

DSB later wore it on the front sleeve design for the 1984 photo shoot of her Towerbell album ‘ I am what I am ‘. 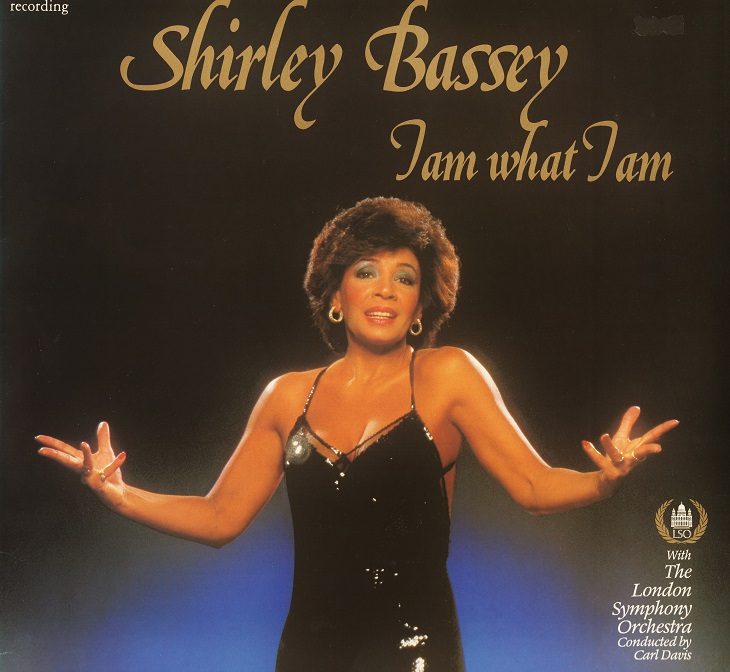 It was also worn at the 1987 BAFTA awards to sing a Bond medley to celebrate 25 years of Bond movies.

We would love to hear from whoever bought this gown at the 2003 Christie’s auction, and know what became of it!

…black evening gown … a bias cut stage gown with low-cut back and fitted bodice with spaghetti straps, the black gauze ground embroidered over all with black sequins, the neckline inset with black net, labelled inside Loris Azzaro Paris.