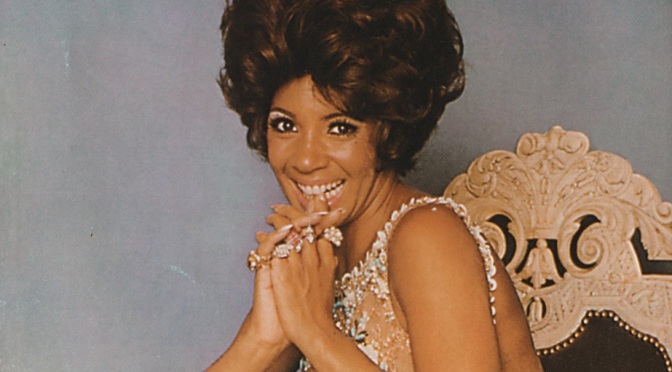 Thanks to Gown Guru Ian for this report

A stunning catsuit designed by Doug Darnell in 1969, consisting of natural coloured chiffon which is covered in Swarovski crystals of aquamarine and turquoise.

The catsuit originally had wonderful bell-bottom trousers, finished off around each hem in ostrich feathers, very late 1960’s 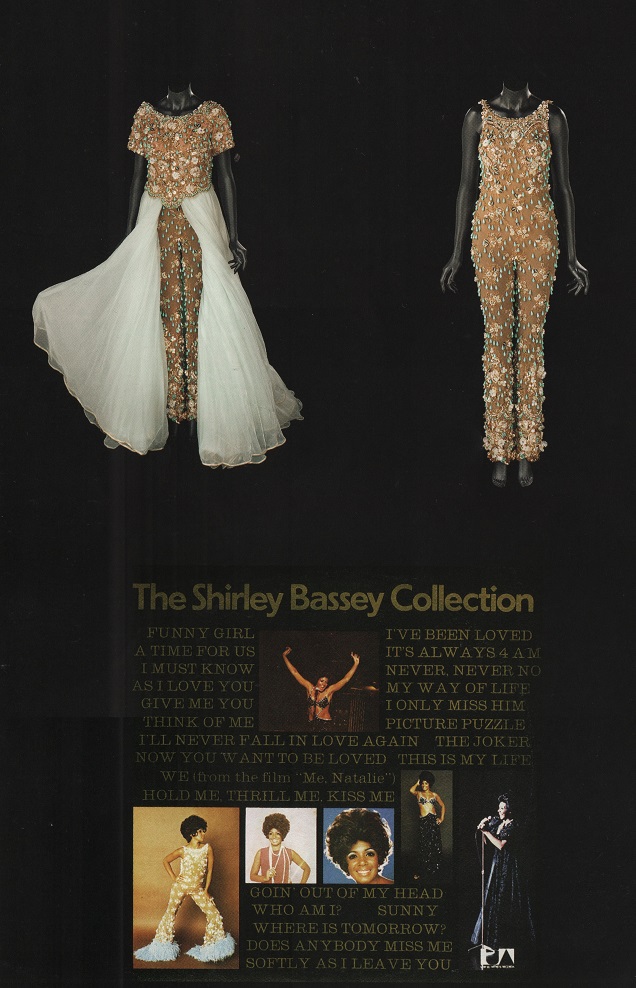 Dame Shirley loved this outfit and wore it on many appearances between 1970-1974, including her season at the Talk of the Town in 1970 and for several album shoots.

In 1997 for the occasion of her 60th birthday Dame Shirley decided to have Doug reinvent the catsuit to modern day fashion!

Doug revamped it with straight trouser legs and took off the ostrich feathers. Dame Shirley wore this on her 60th Birthday TV show to sing ‘Slave to the Rhythm’ and on her 1997 open air picnic concert at Althorp House, the family seat of the Spencer family, a few months before Diana died. It’s now run by Charles Spencer, with a museum and an exhibition of Diana’s gowns. Her grave is on an island in the lake.

At a similar picnic-style concert the same year, at Castle Howard in Yorkshire, Shirley wore the ‘Pizza Gown’.

This outfit is a testimony to DSB’s hard work at keeping a stunning figure, being able to wear an outfit at 60 and look as good (if not better) than she did when she first wore it at age 32!

This catsuit was worn by Dame Shirley on many occasions throughout her career from the 1960s until recently. The legs were originally flared and the hems trimmed with turquoise ostrich feathers. These were removed by Darnell some time later and the trouser legs were straightened, the corresponding coat included in this lot was designed at the time of the trouser leg alterations.

The photograph illustrated on the frontispiece of the catalogue is taken from the inside gatefold sleeve of the 1971 album Something Else. The catsuit was also worn by Dame Shirley during the Talk Of The Town shows, April, 1970 and is featured on various album covers from the 1960s and 1970s including: Diamonds Are Forever: Pieces of Dreams; Star Des Bal Pare ’70; Love Story Por Su and The Shirley Bassey Collection. Dame Shirley also wore both the catsuit and the stage coat during her 60th Birthday Concert at Althorp Park, July, 1997.

Dame Shirley told us that she loves this outfit.

Thanks to Bigspendah for editing the text.