Best wishes, Dame Shirley Bassey! Happy Birthday and thank you for your magnificent talent, for your art that enchants generations through your incredible voice interpreting beautiful and unforgettable songs!

Dame Shirley Bassey is an icon, a great and charming artist who for decades has given us great joy with her talent, with her beautiful songs. A strong woman with a social sensitivity, she supports several causes, including LGBTQIA +. His 70th album is a Christmas gift and brings us hope for the new year (I made this video with love in his honor and it is published with permission). Best wishes to everyone!

Note: due to a technical problem on the Blog, it was only possible to post this clip today. Happy New Year to everyone!

She is an icon, a legend that delights fans worldwide, and supports the LGBT + community. My reverence and love! *(This video I made with love and it was approved for publication by her – the one and only …. my lovely Dame Shirley Bassey! Tender kisses from Porto Alegre, Brazil, and best wishes to all her fans around the world!).

Wow, Dame Shirley Bassey 80th birthday! What can I say?… Everything about her has already been said. In a nutshell, for me she is a great talent voice, glamour, sophistication, humor, excitement and enchantment! A solid career, without scandals and with a lot of artistic quality. A great woman, a simple, friendly and accessible persona, respectable star worthy of the honored royal title DAME! She has won countless awards and thrilled thousands of fans at her fantastic shows around the world! So amazing costumes, the famous covers, hairstyles, and incredible charisma made her an icon, a legend, a DIVA! And just like diamonds are forever, she’s a “DIVA FOREVER” deep in the heart of all her fans! HAPPY BIRTHDAY! Accept this simple homage of your Brazilian fan. I chose some photos that show a little of his brilliant career.

Nobody does it like SHE!… Yeah!!!  (clik to enlarge/zoom image) 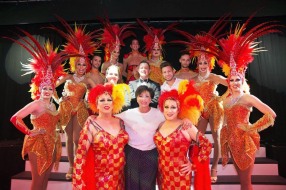 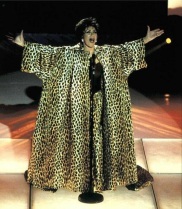 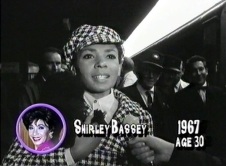 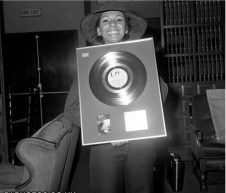 Shirley with the Gold Disc she received for The Singles Album