She has enjoyed for a week of good weather in the south of Gran Canaria after staying for the first time in the Hotel Lopesan Costa Meloneras, whose good services and extensive wonderful gardens she praised, ensuring return soon to enjoy them.

Because of its close relationship with the directors of the show MASPALOMAS DE NOCHE!!! from Gran Casino Costa Meloneras, Fidel Rodriguez and Manel Dalgó, the diva decided to spend a few days holiday in Meloneras and attend as a guest to this show. Although he offered no performance during her visit to the Casino, could not avoid going through the backstage to greet all the artists in the show and congratulate them for their work. 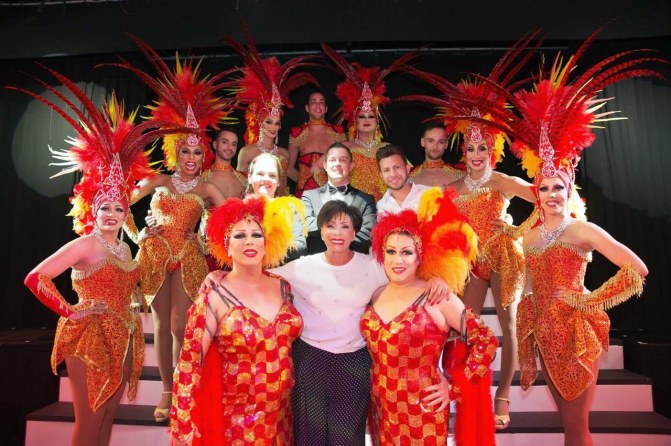 The great singer loved the tour on the island in the company of friends.Special moments shared with our great Dame in this wonderful place! How I wish to be there to !!!… and who does not?! (Original post here) Special thanks to Manel Dalgó for sending the photos. (If you like it, please share it!) 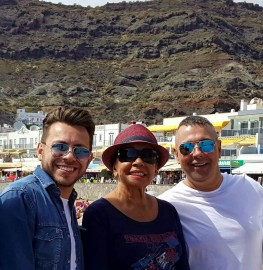 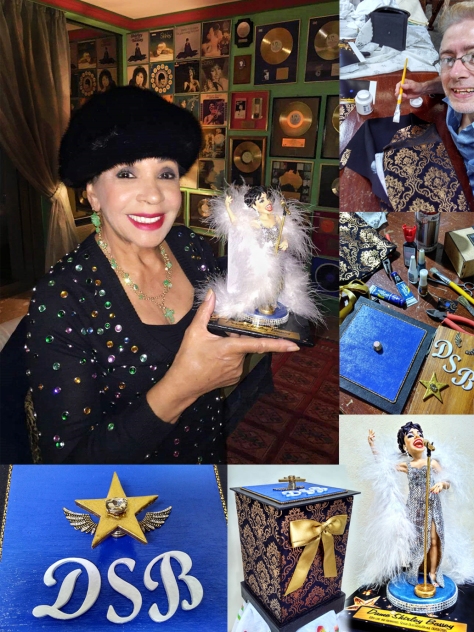 Dame Shirley Bassey looks happy with the modest gift that I sent for her birthday (jan/08/16). A beautiful and talented woman who has a wonderful career because of her incomparable voice, has numerous gold records, has class, has charisma and many other adjectives that makes her a DIVA with worldwide fame. And yet, she’s a simple, funny and youthful person with a crystalline soul, as her voice is. Certainly, she has received almost all kinds of gifts: diamonds, stunning dresses, trips, etc … So what could I offer on the occasion of her birthday?… I thought: as she excites and delights her fans with her voice and performances, thrill her would be a good thing! And so, I had the idea to order the creation of a miniature doll (handicraft “biscuit”) that would be sent in a more refined box (I found nothing of my liking and decided to make one).

The gift was sent to a dear new friend who lives in Monte Carlo, a generous person, international artist, talented and loved by many colleagues: Manel Dalgó! He’s a great friend of  DSB and was so kind to deliver the gift when she returned from a trip! I was glad to know that she loved the gift (the doll made by an artist here from my city – Porto Alegre (Brazil) – and the box I did). The smiling pose from DSB at home, in the living room of his gold records, demonstrates the joy of an “eternal little girl” with her doll. She loves the doll! Excitement and joy for me to know that my goal in demonstrate affection was achieved. My respect and my devotion to you great Dame Shirley Bassey! With love, please accept a strong hug of all your Brazilian fans! (Here, the original post in FACEBOOK) (If you like it, please share it!) 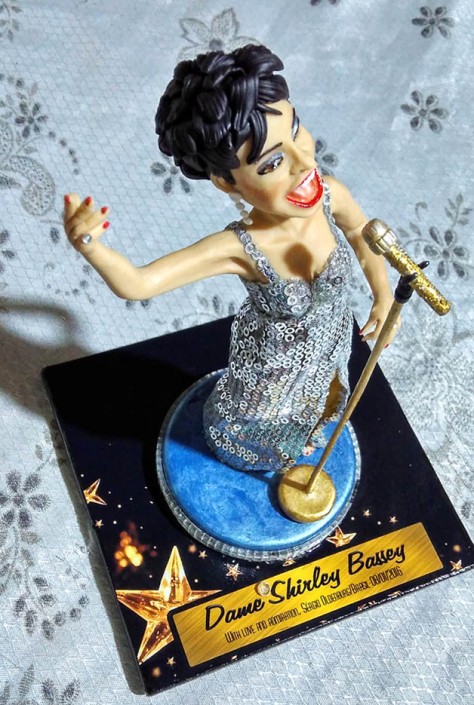 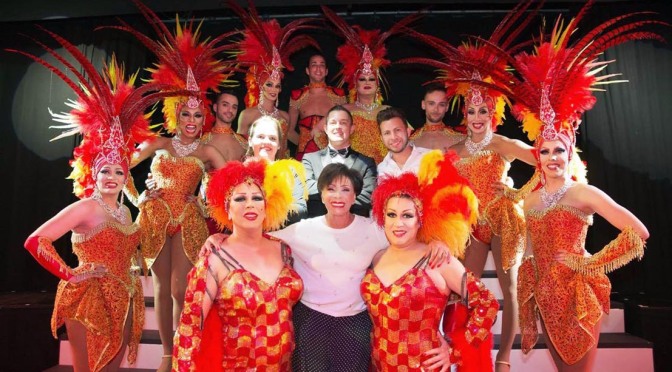 DSB was delighted with the show MASPALOMAS DE NOCHE!!!, so she went to congratulate the performers, posed for photographs with the cast along with the artistic directors. It was an unforgettable experience for all.

As she said: “The best show I’ve seen in years!”

The Dame had a special and affectionate words with for the outstanding Armani D’Vyne Duffus who impersonates the singer at the nightly dinner show.

Having your idol next to you is a dream that few can come true and Armani was luky this night and had the privilege to perform to DSB in the audience. She also posed with Taran Missen, the talented English singer who starts the show.

Certainly, a magical and unforgettable night for all! She’s a lovely lady! (If you like it, please share it!)

There’s been much chatter over the past few weeks from chart-watchers discussing the achievements (or not) of Justin Bieber, who has been breaking UK Singles Chart records on a weekly basis since he became the first living act since The Beatles in 1963 to replace himself at Number One a few weeks ago. Some consider it less of an accomplishment in this day-and-age where the chart is made up of download sales and streaming figures, thus enabling album tracks to enter simultaneously, whilst others are quite content to give Bieber his due credit.

One record that the 21 year old Canadian will have to wait some time to conquer is the Longest UK Singles Chart Career, a longevity record that has been held by the legendary Tony Bennett since 2010 when he lent his distinctive vocals to a section of the charity single We Are The World 25 for Haiti (which, coincidentally, also features the input of the aforementioned Bieber, then only 16). Bennett first appeared on the UK Singles Chart in April 1955 and made his last appearance (so far) in October 2011 on the duet with the late Amy Winehouse, Body and Soul. This is a seemingly unbreakable span of new material in the Singles Chart of 56 years and 5 months… but Shirley Bassey is about to steal his crown.

Blake and Shirley’s version of The Christmas Song (Chestnuts Roasting on an Open Fire) was released on Friday and, regardless of the chart position, when it enters the chart this week it will extend Shirley’s run of UK hit singles to an astonishing 58 years and 10 months – she first appeared in the listings with The Banana Boat Song on 21st February 1957. To put this in context, it’s the equivalent of Justin Bieber having a new recording enter the chart in 2068!

When Shirley wrenches this new chart record from Tony Bennett (surely it’s a case of ‘when, not ‘if’?) she’ll be one of only seven artists to amass over 50 years of new hits on the Singles Chart. The current long-stayers are:

Tony Bennett (56 years, 5 months) from Stranger in Paradise (1955) to Body and Soul (2010) – Bennett entered the album chart more recently, with his Cheek to Cheek album with Lady Gaga in 2014, but no singles charted from this release.

Paul McCartney (52 years, 3 months) from Love Me Do (1963) to FourFive Seconds (2015) – McCartney’s collaboration with Rihanna and Kanye West extended his chart reign to go ahead of fellow Beatle Ringo Starr, who last appeared in the charts on Peter Kay’s 2010 Children in Need single.

Brian Wilson (51 years, 4 months) from Surfin’ USA (1963) to God Only Knows (2014) – The Beach Boys founder and pop music legend sneaks his way into this list by taking part in the BBC’s 2014 cover version of his own song, raising money for Children in Need. A note to pop stars who want to extend their chart life… get in on a charity ensemble, it’s the surefire way to get yourself back in the charts, even if you’re only singing one line. 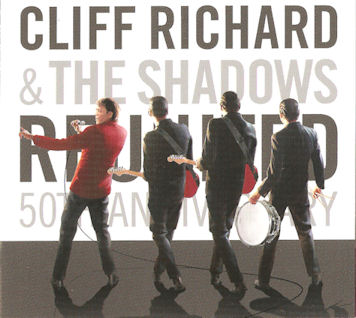 Cliff Richard (51 years) from Move It! (1958) to Singin’ the Blues (2009) – after McCartney, Cliff is probably the closest rival to take the longevity crown, still producing new material, although he hasn’t made it into the Singles Chart since this 2009 version of the Melvin Endsley standard alongside…

Bruce Welch and Hank Marvin (50 years, 7 months) from Livin’ Lovin’ Doll (1959) to Singin’ the Blues (2009) – the two members of The Shadows (formerly The Drifters) make up the last places in the over-50-years chart club, just shy of Cliff’s timespan as they didn’t appear on his first hit records.

Shirley currently sits in seventh place on the list after her return to the chart in 2007 with her rendition of Pink’s Get The Party Started, but she deserves to be at the top of this list, in illustrious company. Come Friday she will leapfrog everyone and gain pole position as the longest charting performer (with new material) in UK Singles Chart history. Not only is there a chance of a high chart placing on Christmas Day, there’s even a possibility of a Number One – Shirley’s first since 1961? We’ll have to wait and see – all sales and downloads up to midnight on Christmas Eve will count towards the chart so (as if you need any encouragement) BUY, DOWNLOAD and STREAM the HECK out of it NOW! The Official Christmas Chart will be announced live on BBC Radio 1 between 10am and 1pm on Christmas Day so tune in to find out where The Christmas Song ends up. If you need further enticement, here’s a new interview with Dame Shirley and the Blake boys… wouldn’t it be nice to end the run of X Factor hits and finally have a classic Christmas song at the top of the charts on the big day? Shirley certainly thinks so!

Finally, an additional tidbit of chart trivia… all this talk of Bieber taking up the number one and two spots in the Singles Chart reminded me that Shirley very nearly did the same thing back in the day. In February 1959 she held both the number two and number three spots on the chart with As I Love You at #2 and Kiss Me Honey Honey Kiss Me at #3. The person keeping her from topping the chart? Only Elvis Presley… whom she knocked off the number one spot the following week.