Today another duet from the French 1988 TV-show ‘Le grand echiquier’. It is the duet Dame Shirley Bassey does with Charles Trenet. Song: ‘I wish you love’.

Translation of the article above (By Ed, Christophe & Pieter): (With special thanks to Andre for the article)

The inimitable performer of ‘Goldfinger’, Shirley Bassey, made the trip to Paris for the ‘Grand Chessboard’: a rare opportunity to see this lady perform some of her immortal melodies live. It is however very likely that we won’t get to hear one of her most famous songs, ‘Stormy weather’. Shirley Bassey confided one day that as just stated in the title, she felt her nerves tense. ‘Stormy Weather’ in fact didn’t bring her any luck. One day in England, she performed this song when an outage plunged the room into darkness and even she was terrified, she had to go on in order not to put the public into panic. Another time, on the same air, her belt broke and she found herself on stage with just a garter belt. Later, she had to share stage with a fire-eater doing his number. She was so impressed by the flames that she repeated the same verse three times without realizing it. Finally, in Melbourne, Australia, the stage production decided that she would make her entry in a large shell which was supposed to open when the music started but the machinery broke completely and Shirley sang ‘Stormy Weather’ from inside the shell! Since then, she does not want to tempt fate. And, if she perfoms ‘Stormy weather’ on  ‘Le Grand Equiquier’, you now know that it will be a true event! 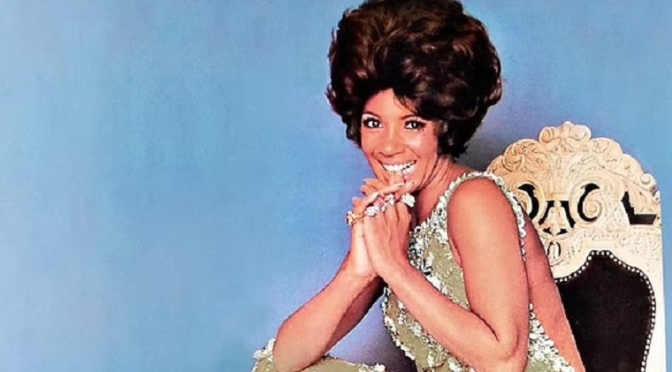 Diamonds Are Forever is just one of the fascinating objects being spruced up at the V&A museum in a new TV series.
A new series on BBC2 takes you behind the scenes of Victoria & Albert Museum.
Secrets Of The Museum tells the stories behind some of the priceless objects.
It includes pieces such as Dame Shirley’s favourite ostrich feather catsuit.

Last year, due to the pandemic, it closed for the first time since a brief shutdown in the Second World War, but the break gave its conservators, curators and technicians the chance to restore some of the artifacts.

Now a new series of Secrets Of The Museum takes you behind the scenes, and tells the stories behind the priceless objects…
She wore the outfit on the record cover for the Bond theme tune Diamonds Are Forever and it originally had bell bottoms decorated with turquoise feathers, but was later adapted with straighter legs (pictured)

Dame Shirley Bassey’s favourite outfit from a career that began in 1953 and shows no signs of stopping is this shimmering nude-coloured silk chiffon and net catsuit.

Heavily embroidered with glass beads and sequins, it was snapped up by the V&A at a charity auction. ‘We were lucky,’ says senior curator Simon Sladen.

Now aged 84, the Tiger Bay singer has worn the catsuit many times. It was designed in 1969-70 by Douglas Darnell, who said of Dame Shirley, ‘I know her figure inside out, and which are the best bits to show.’

The catsuit originally had bell bottoms decorated with turquoise ostrich feathers, but was later adapted with straighter legs. As she twisted and moved on stage though, the fabric suffered splits.

Once repaired, the catsuit is displayed on a mannequin with a matching full-length cape, embellished with aquamarine sequins and the ostrich feathers.

Shirley was pictured wearing the outfit on the record cover for the Bond theme tune Diamonds Are Forever, and under the light Simon spots that the sequins are in a diamond pattern.

‘Another link to Diamonds Are Forever,’ he says. ‘I hope we’ve done her justice.’

Dame Shirley Bassey, 84, looks effortlessly chic in a black trouser suit and white embellished top as she attends the Red Cross Summer concert in Monaco (By NIOMI HARRIS FOR MAILONLINE)

She’s carved out a glittering music career spanning almost 70 years, releasing huge hits including Goldfinger and Diamonds are Forever.
And Dame Shirley Bassey continued to dazzle as she put on an effortlessly chic display while attending the Red Cross Summer concert in Monte Carlo, Monaco on Friday. The legendary singer, 84, looked smart in a sleek black trouser suit and an embellished white top as she posed on the red carpet at the event.
Shirley appeared in great spirits as she flashed a dazzling smile while posing in her black blazer and wide-leg trousers.
The Welsh beauty teamed her look with sparkly black heels anThe star was in great company at the annual charity event as it was also attended by Prince Albert II of Monaco and Princess Caroline of Hanover. d a matching handbag, while she added a further touch of bling with a diamond necklace and stud earrings.

In 1959 went from Phillips to Columbia but as you can read below on the newspaper articles it was a not a smooth transition. Her last album for Phillips was The Bewitching Miss Bassey and the first album for Colombia was The Fabulous Shirley Bassey.