I have been buying records, CDs etc by Shirley now for longer then I care to remember and I still come across the odd release I’ve never seen before.  Recently I came across an album I’d never seen before.  I was looking on the German Amazon site and looking at Bassey CDs and vinyl and came across it.  They had the one copy for sale from a private seller and so I bought it.

This is a 2 disc set from Italy released on the EMI Columbia label in the ‘Club 21’ series.  There is no date for what year it was released in on either the sleeve or the record labels.  It is a 24 track compilation set and all the recordings are from her time at Columbia.  Included are the songs ‘Goldfinger’, ‘What Now My Love’, ‘I (Who Have Nothing)’ as well as ‘Gone’, ‘Till’ and ‘What Kind Of Fool Am I’.  Quite a nice selection altogether.

It’s certainly worth my while keeping my eyes peeled for different LPs.  I’ve seen one on a Turkish auction website but unable to work out how to be able to bid on it.  Maybe one day I’ll get it!!

This album though is a great addition to my collection.

The design talent behind the cover art of Dame Shirley Bassey’s albums ‘The Performance’ and ‘Hello Like Before’ has delighted us on Instagram with two wonderful galleries.

Design for Dame Shirley Bassey – The Performance I was asked by Geffen Records to come up with ideas for Dame Shirley Bassey’s album, (her first studio recording of original compositions in three decades) and although the final cover is far from what I had initially proposed, I won DSB over on the strength of the crest logo I’d designed which apparently she adored. The original image used on the cover was shot in colour on a white background, DSB in a red outfit, by photographer Mary McCartney (daughter of Sir Paul). After the magic was worked on the image it was featured as Portrait of The Month at the National Portrait Gallery in London. . . . #dameshirleybassey#theperformance#davidarnold#andrewmurabito#musicdesign#graphicdesign#albumcover#singlecover#artdirection#typography#branding#logo#packaging#print#musicpackaging#cdcover#album#albumcover#albumartwork#vinyl#musicartgallery#weartyouldn#weartyoudesign#weartyouworld#weartyou#photography#portraitphotography#nationalportraitgallery#musicphotography#marymccartney#geffen

Art direction and design for Dame Shirley Bassey – Hello Like Before . The follow up to DSB’s The Performance was also released on vinyl as a special edition package containing a 12” sized 24 page booklet. Photographer Jason Bell shot all new images as well as the cover in a house in Stamford Hill, North London. . . . . #dameshirleybassey#hellolikebefore#andrewmurabito#musicdesign#graphicdesign#albumcover#singlecover#artdirection#typography#branding#logo#packaging#print#musicpackaging#cdcover#album#albumcover#albumartwork#vinyl#musicartgallery#weartyouldn#weartyoudesign#weartyouworld#weartyou#photography#portraitphotography#musicphotography#jasonbell#shirleybassey#sonyrecords#vinyljunkie

Our thanks to Andrew Murabito for sharing these behind the scenes stories and for following/tagging The Bassey Blog.

Andrew told us “I got to meet Dame Shirley at the shoot for the second album I designed and she was absolutely lovely!”

DSB can be found among a great portfolio of Andrew’s works at their We Art You website.

This 16 track compilation was issued on the Liberty label in Japan in 1981.  All of the tracks are from her United Artists recordings but two of them are ‘live’ as the studio recordings of the songs are from her Columbia days.

Although the album is called ‘Greatest Hits’ not all the tracks were hits for her.  The big ones are certainly there i.e. ‘Something’, ‘Never, Never, Never’ and ‘For All We Know’ but it also includes such songs as ‘Feelings’ and ‘Send In The Clowns’.  ‘Yesterday When I Was Young’ is included as that song was a big hit for her in Japan.  The one track that stands out and makes this album special for me is the original UK single release recording of ‘This Is My Life’ in stereo.  I hadn’t played vinyl for a while as I had nothing to play them on but I bought a record deck and played this record out of curiosity.  I was astounded when I heard the track and have to say the quality is terrific.  I’ve always loved that version (it’s similar to the Italian ‘La Vita’ version) and although I had got it on an LP from America I feel this is better quality.

The photo on the front of the album is taken from the session for the UA album ‘The Magic Is You’.  There are three colour concert photos on the back which may have been taken at her 1977 Japanese concert.

Below is the track ‘This Is My Life’ which I have taken from this album.  Hard to believe that this recording is actually 50 years old this year. 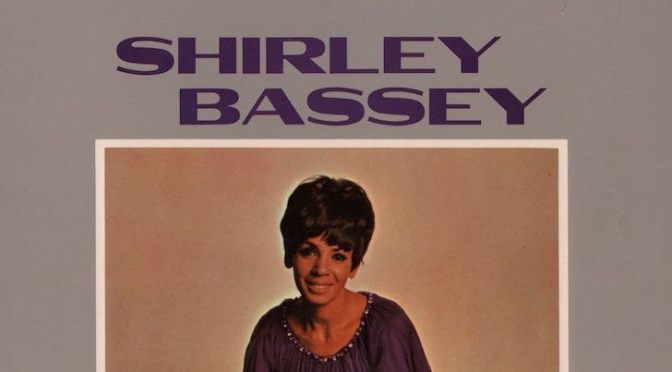 In 1970 EMI Odeon in Spain released a series of compilation. albums in called ‘Gigantes De La Cancion’.  Translated into English it means ‘Giants of the song’.  There were 30 albums issued and the compilation album of Shirley’s recordings was ‘Vol 5’.

The album consisted of 12 tracks and all were taken from Shirley’s Columbia recordings. Obviously included were some of her hits such as ‘Goldfinger’ and ‘What Now My Love’ there others which were popular with fans.  These included ‘Till’ and ‘Somewhere’.  The cover photo on the sleeve was the photo used on Shirley’s UA album ‘I’ve Got A Song For You’.  The reverse of the sleeve carries the same photo but in black/white and lists the tracks and also all the 30 artists in the series. 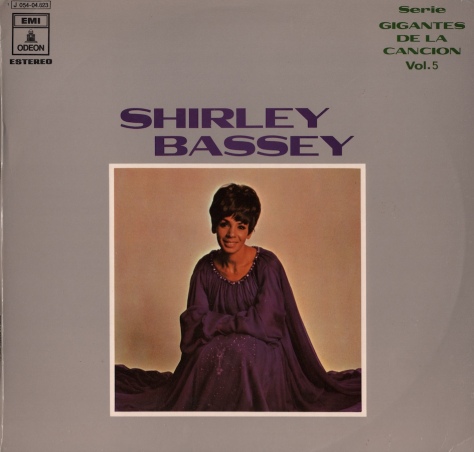 EMI Odeon also decided to release the abum as a special club edition with a completely different sleeve.  The record itself carries the same title although there is no title on the sleeve.  The tracks are in the same order as on the original album.  Printed on the record label is ‘Edición especial para DISCOLIBRO’.

I’m not sure why but the record company also released the album under the title ‘The Giants’.  The album sleeve is just the same as the original album.  It also has the same catalogue number.